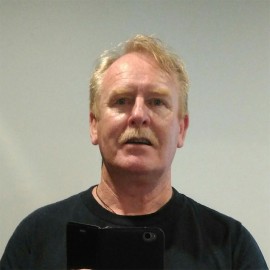 David Woodings is a Christchurch based full-time artist with a strong connection to the photo-realist painting style of American East Coast artists. This connection had its genesis when he saw the exhibition American Photo Realism at the Barrington Gallery in Auckland in 1974, and his first works influenced by the style were produced in 1978 during his years studying at the Elam School of Fine Art. He showed his first photo-realist inspired works at the Peter Webb Gallery in Auckland with fellow realists Martin Ball, Jon Tootill and Paul Radford under the banner Four Photo-realists in 1978. The early works focused on glassy building interiors and exteriors, while also documenting and commenting on the growth of the fast food industry in New Zealand through the imaging of restaurants and their environments. His first on-person show ‘Visions’ was at the Denis Cohn Gallery in 1981 and he continued to paint and exhibit through the 80s and 90s with a number of solo and group exhibitions.

With his return to full-time painting in 2005, after a period working in the heritage sector, arcade machine images became the main characters in a narrative about social place. The paintings, now on a large canvas confrontational scale, where the handling of the subjects invites active rapport and interchange between the spectator, the painted surface and picture plane, and the image.