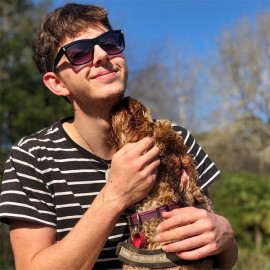 After moving to New Zealand back in 2002 from his hometown of Southampton, England, Miles attended CoCa Art School in Christchurch when he was younger and ever since has been pushing the boundaries of his creativity through any means possible. After severing the nerve and tendons in his wrist back in 2021, Miles now finds exercising his creative side as therapy for both his hand and his soul.

He holds an ATCL with distinction in performing arts and trained as a black belt in aikido. The performative nature of these endeavours has pervaded itself into Miles’ creative process whereby the start of each painting is usually either a contemporary or abstract piece of its own, created through dance-like performance. Music is always blaring from his Christchurch studio - the mood of each piece is often a subconscious reflection of the records listened to.

Miles utilises mixed media to create his artwork with a heavy reliance on: acrylic paint, spray paint, charcoal, markers, pastel, and crayons. His neo-expressive sgraffito style is aggressive in nature and finds depth in the layering created by palette knives, plastic scrapers, brushes, and stencil work. The contrasts in colour, texture, and medium, combine together and offer a noisy interpretation of the subject in question. His fascination with composition and structure has permeated into his work through the inclusion of exoskeletons, bold lines, and the hard edges offered by stencil-work. The themes of fragility and weakness are present in his works, with many feeling like the manifestation of chaotic angst.

Miles said, “as much as people hate making mistakes, when it comes to my art nothing is a mistake, it’s an idea to work off of and to include. Many times I’ll make a plan for a painting then when I’m done it’s the complete opposite. Each failed mark I make on the canvas is an opportunity to creatively think how to incorporate it. The end result is the end result. I’ve learnt to go with the flow as that’s where I find my true creativity lies - in the spontaneity”.